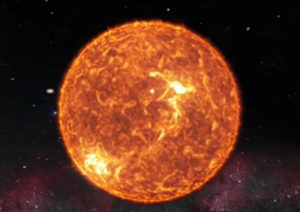 F9 – Music Video 02:58 –
Dir. Thomas Florek — New Jersey, USA
Your Host In Attendance!
Synopsis – F9 is shorthand for “The results of the test can be positive or negative”. This was coined by Andrea Rossi at his site: Journal-of-nuclear-physics.com 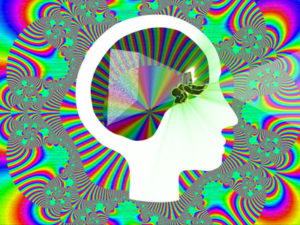 Unified Theory – Animation 04:42
Dir. Christina Hibner — Pleasantville, NY, USA
Synopsis – Unified Theory is an experimental animation that follows two cosmic entities. The main character, Junior, is trying her best to learn about the nature of the universe from her teacher, Senior, who is a master of the universe. Junior experiences moments of enlightenment that transform the way she sees the world, literally opening her eyes to things she could not imagine. This film is inspired by the scientific learning process, drawing conclusions by making millions of mistakes. This transcendental adventure across time and space will spark the viewer’s curiosity and question their perception of reality. 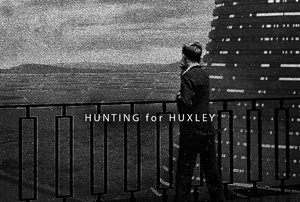 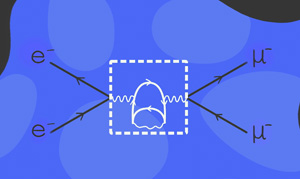 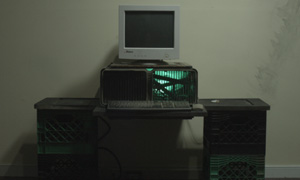 Keystroke – Short Film 19:52
Dir. Tom Sanchez Prunier — Midlothian, VA
Synopsis – Two roommates clean up their new apartment after the previous tenant – a hoarder – and find a computer with a journal of all history that they can edit in any way they please. 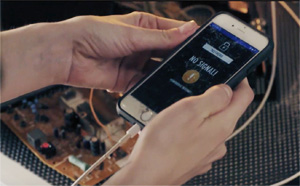 The Uncanny Valley – Short Film 15:32
Dir. Ian Vardy – St. John’s, Newfoundland, Canada
Synopsis – 5 months after the internet and all digital devices have gone down, Allie (Al) is suicidal and depressed. With the announcement of a new internet, Al ruminates about her relationship with technology and others. During her journey to become reconnected, she learns what kind of connection we truly need. 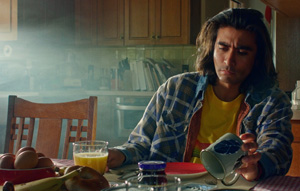 5 Minute INTERMISSION For Speaker Set Up

VRPlayin is a Proud Sponsor of the
Virtual Reality Films
at GeekFestToronto2020
Visit them today at vrplayin.ca 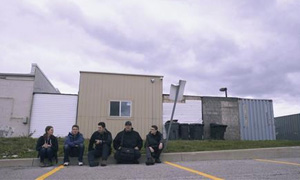 Window Seat – Film Intro + Q&A with Director!
Documentary, Student Film 10:20
Meagan Brown — Toronto, Canada
Synopsis – Window Seat follows plane spotters Ernest and Spencer along the perimeter of Toronto Pearson Airport, sharing the story of this unconventional pastime and the community at the end of the runway. 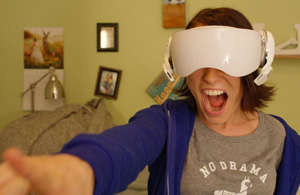 Life XP – Web / New Media 16:18
Dir. Trevor Addie — Maple Ridge, BC, Canada
Synopsis – Life XP is an action-packed dramatic comedy that takes place both in real life and Virtual Reality. Our main character Angela finds herself fired from her old job and thrust into Beta Testing the newest VR system. Each week she is immersed in a new video game and it starts to have an impact on her everyday life. All Angela wants is to be the hero of her own story but seeing as she’s never played a video game before and her life is going into shambles this may prove harder to gain the XP points needed to become the hero rather than the zero. 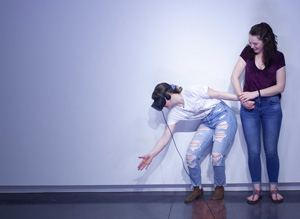 Seeing Through – Film + Q&A with Director!
Documentary, Short 11:54
Dir. Jordan Quaglia — Denver, CO, USA
Synopsis – Seeing Through is a short documentary about people trying virtual reality (VR) for the first time, exploring themes at the intersection of immersive technology and the cognitive science of fear. By capturing people’s real responses to an illusory risk, the film examines the power of seeing through illusions, the eyes of others, and this new technology of VR. Ultimately, we hope our film serves as a looking glass to reflect on seeing through illusions, doubts, and fears that hold us back in real life. 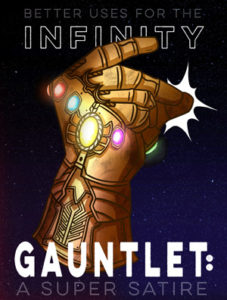 Better Uses for the Infinity Gauntlet: A Super Satire – Short 04:52
Dirs. Tanya Wheelock, Greg Larro, Josh Solomon — Kissimmee, FL, USA
Synopsis – Thanos had one thing right: Incredible, cosmic power in the palm of your hand? You could accomplish great things with a snap of your fingers! He was, perhaps, thinking a little too big though… There have to be better uses for the Infinity Gauntlet than wiping out half of the universe, right? 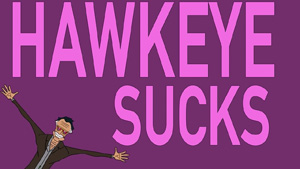 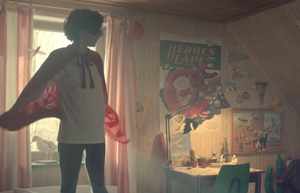 Cape Of A Hero – Short Film 17:53
Dir. Lucyus Ribas – Curitiba, Brazil
Synopsis – Set in a world where super-heroes have become inactive, Timothy serves as a counselor to those who’ve lost their super-abilities. 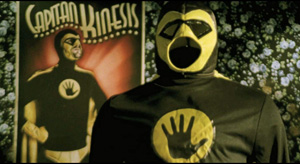 Capitán Kinesis – Short Film 10:52
Dir. Carles Jofre — Palma de Mallorca,
Islas Baleares, Spain
Synopsis – Sebastián is a retired superhero who lives alone in a small flat. He leads a quiet life and it’s ages since he last used his superpowers, but an unexpected visit puts his world at risk and he will be forced to defend it. 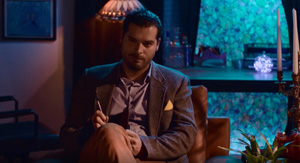 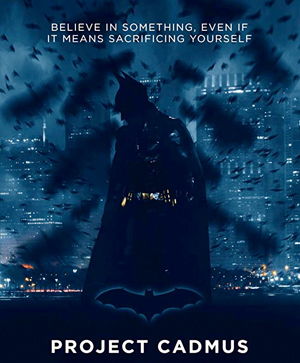 Project Cadmus – Short 19:21
Dirs. Brandon Lescure, John Crawford — Pennsville, New Jersey, USA
Synopsis – A younger Bruce Wayne/Batman who has stepped down from crime fighting due to the meta-humans arrival, now finds himself in position to fight one more time as he knows he is the only one who can stop Gotham from being destroyed. During this journey, he finds himself once again dealing with the one he intuitively despised, Amanda Waller. The feeling was mutual. 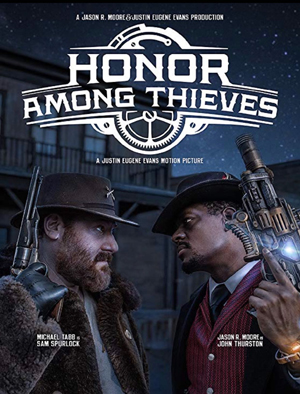 Honor Among Thieves – Short Film 10:00
Dir. Justin Eugene Evans — New Berlin, WI, USA
Synopsis – When a planet-hopping cowboy-criminal (Jason R. Moore, Marvel’s The Punisher) returns to New Mexico after a heist-gone-wrong, he expects a hero’s welcome. Instead, he finds his mutinous crew have decided he’s no longer in charge. 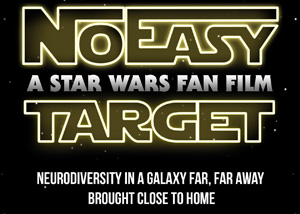 No Easy Target – Short Film 16:07
Dir. Orion James Couling — Chicago, IL, USA
Synopsis – The First Order continues to rule the galaxy with an iron will. The Resistance, broken and splintered, holds on to the last pieces of hope.

Yet on a far off moon of the galaxy, hope lives among the people in a small colony. This small colony escaped from the strict rules and ways of being to create a new home that welcomes all people of all abilities.

They are resilient, they are strong, and they are No Easy Target.

No Easy Target is a Star Wars Fan Film featuring actors with Down Syndrome alongside their peers. The diversity in the film reveals a galaxy rejected society. Let your expectations be blown away as the Jedi show the universe how capable they really are by being resilient, strong, and fighting to bridge the social gap. In this revolution of inclusion, you too can witness the first time a Star Wars fan film features main action characters with actors who have Down Syndrome. 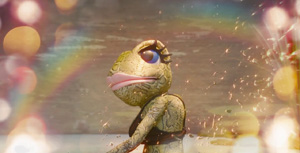 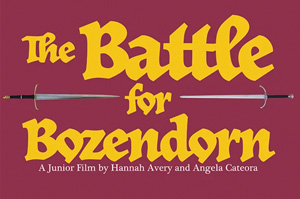 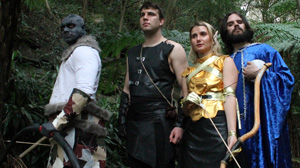 Roll Initiative – Short Film, Student Film 09:22
Dir. Stefan Varvaressos-Abdi — Sydney, Australia
Synopsis – A party of Dungeons & Dragons players encounter needlessly dangerous situations in their fantasy world due to one of their overly reckless members, Boulder. After comical deliberations and tangents on what the party should do next, the Dungeon Master leads them to encounter a Half-Orc that has been terrorising a village. When Boulder unexpectedly engages with the half-orc immediately, they fight and kill the beast, only to learn that the half-orc only acted aggressively because he was scared of the villagers. Boulder, and his real life counterpart, realise the damage his recklessness behaviour is causing, and strives to pay for his mistakes and do better in both life and the game.

GeekFestToronto – A Loveless Retreat For Self Professed Geeks
~ Toronto Life